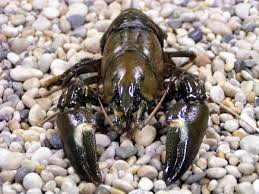 The Scourge of the Clyde
Are these creatures a bigger threat than
Gyrodactylus Salaris
In Salmon Rivers?
The Simple Answer is YES!
American Signal Crayfish (Pasifastacus leniusculus) a species native to the
southern states of the U.S.A. were first introduced to Great Britain from
Sweden initially for the aquaculture industry. Since then they have steadily
invaded many of our rivers, lochs, lakes and ponds throughout the U.K. They
pose a major threat to whole freshwater and in some cases brackish water
ecosystems.
These crustaceans similar to lobsters can colonise and decimate a river system
in a short period of time. As now seems to be the case in the River Clyde
Catchment area.
American Signal Crayfish were first reported in the upper reaches of the River
Clyde in the area near to Elvanfoot in 1996.
A barrier was erected at the headwaters of the River Clyde to prevent the
migration of crayfish into the headwaters of the River Annan.
Despite the concerted efforts by the United Clyde Angling Protective
Association Ltd. to trap and eradicate them There now seems to be some
evidence that populations may have become established in one of the lower
tributaries above the tidal weir in Glasgow, This information came to light at a
recent meeting of the River Clyde Fisheries Management Trust Ltd when the
Mid Clyde Angling Association representative Kemp Meikle was advised of a
crayfish trap having been found in the South Calder Water near to Coltness
North Lanarkshire. This ties in with an article on the Carrick Invasive Species
web page in March 2013 with a link to the Clyde River Foundation about an
otter (Lutra lutra) having been trapped and subsequently dying in an illegal
crayfish trap. It now transpires that this is the same incident where the illegal
crayfish trap was found in the South Calder Water. Apparently none of the
angling clubs or associations within the Clyde catchment were made aware of
this.
There have also been reports of an American Signal Crayfish having been
found in the River Kelvin catchment
Facts
Fact: There are no species of crayfish indigenous in Scottish Rivers or Lochs.
Fact: 7 different species of Crayfish can now be found in various parts of the
U.K. only one of which is a native species in England and Wales and that is the
White Clawed crayfish. There are 4 non native North American species which
are the American Signal crayfish, Red Swamp crayfish, Spiny-cheeked crayfish
and the Virile crayfish. There are 2 non –native European Species which may
also be found in U.K. waters, the Turkish narrow-clawed crayfish and the Nobel
crayfish. There is an excellent article on identifying each of the species mention
on the Environment Agency’s web page.
Fact: It is illegal to trap or move live Crayfish without a proper licence
Fact: They tunnel into river banks by as much as 3 feet causing bank
degradation and collapse in some cases. The result is rivers can become silted,
wider and shallower, loss of pasture or grazing to farmers in some cases tree
fall leading to blockages.
Fact: They eat vast amounts of fish eggs leading to serious decline in the
numbers of fry hatching and eventually in serious cases being non existent.
Fact: They decimate aquatic invertebrate populations which will lead to any fry
lucky enough to hatch starving or Parr and Smolts being seriously under
weight. In short the river eco system will collapse.
Fact: Crayfish can migrate vast distances if they are washed down in detritus
such as tree roots in high water conditions.
Fact: Crayfish can migrate across dry land to get to nearby water course
especially when the grass is wet.
Fact: Many anglers think they benefit the river because the big trout get bigger
eating them. This may be the case in the first few years; however a total
collapse of fish stocks will follow in ensuing years.
Fact: American Signal Crayfish can tolerate up to 75% salinity from sea water.
I have attempted to create a model of how Crayfish can multiply to give some
idea as to the impact they can have given suitable conditions.
I have based my model on two mature male and female American Signal
Crayfish finding their way into a new river system. Some research has shown
that 10% to 52% of young can survive until sexual maturity. I have based my
figures on the lowest number quoted. Some may reach sexual maturity at 2
years of age and that is the baseline for my figures.
Year 1: 2 male and 2 female crayfish are washed downstream to River X during
winter spates to where it meets River Y ( no previous crayfish present) They
proceed to take up residence in River x. Both females survive until spring when
they shed their young which have been attached to them throughout the
winter. They continue to survive for many years producing eggs annually.
Each female lays 200 eggs each 50% of which are female and 50% male these
take up residence in the river and subsequently begin to grow. If 10% survive
until year 2 with 50% being females the total is 20 females and 20 males. If all
of the females manage to become egg bearers with 200 eggs this could lead to
4000 young hatching in year 3.
Again I have chosen 10% survival = 400. 50% of which are female = 200 this
would equate to possibly 40,000 eggs being hatched in year 5. Factor in the
original 2 pair producing a minimum 200 eggs annually and we have a
repetitive pattern building up.
Year Mature
Females
Young 10% Survival 50%Females
2014 1 200 20 10
2015 1 200 20 10
2016 1 200 20 10
2017 11 2200 220 110
2018 21 4200 420 210
2019 31 6200 620 310
2020 141 28,200 2820 1410
2021 351 70,200 7020 3510
2022 661 132,200 13220 6610
2023 2071 414,200 41,420 20,710
American Signal Crayfish have been known to survive to at least 15 years of
age the above table is based on a single female living for 12 years and having
first laid at the age of 2. To compare to previous model simply multiply
numbers by 2
Please report all sightings of Crayfish to
S.N.H. 0141 951 4488
If you accidently encounter a live Crayfish place it on a hard
surface and dispatch it with a blow from a flat stone, DO
NOT return it alive or otherwise to the water. It may be a
female carrying eggs or larvae!

Your request to join will be veted,this Facebook page is for members only if you are not a member you won’t be added.

End of the Brown Trout season

End of the salmon season